Meet the agency that's challenging the perception of student tenants

Raffaele Russo, the director of loc8me, which specialises in student accommodation, thinks the idea that students don't care about where they live is outdated - in fact, their expectations are higher than ever.

Raffaele Russo listed his first property from the front room of his student flat in Loughborough a decade ago. The director of loc8me, which specialises in student accommodation and now manages 1600 properties in Loughborough, Lincoln, Hull and Bournemouth, had been working as a nightclub promoter when he decided to change tack.

“I decided to look at the highest expenditure a student has at university and, after education, it’s accommodation,” says Raffaele. “I met a landlord who let me advertise his property and I did this on Facebook at a time when no one was doing it.”

He let about 50 properties from his front room before establishing loc8me, which he says set out to change people’s perception of the market. “There’s this idea about student accommodation that it’s just lots of young, naive tenants who don’t care where they live,” says Raffaele. “But the fact that they’re students is irrelevant.”

loc8me not only saw students as valuable tenants, says Raffaele, but also as their primary customer. “We’ve always seen lettings as a retail market, where the suppliers are the landlords and customers are the tenants. In reality, property is worth nothing unless you have rent and rent comes from tenants,” he says. “Since the internet and comparison websites and social media and reviews came along, tenants have become more relevant.”

He says providing an on-demand, online service is vital when interacting with younger customers. “We’re dealing with customers on their phones because that's where they spend most of their time. We communicate on WhatsApp as a company and with our tenants at the minute” he says. “We’re looking at how we can create communities on a platform that allows people to easily communicate.”

A great product is also essential. Social media means that students are constantly exposed to premium lifestyles and that has an impact on their expectations for the standard of their homes. Raffaele says students are now willing to pay more for their accommodation.

“I think this market is fully focused on the refurbishment creating the income - everyone can own a property but can they own a great product? For us, it's very important our landlords understand that the finishing touches are everything to the tenant - the picture frames, the furniture - all of those small decisions can have a massive impact on the rent,” he says. “We’re trying to create environments that create memories.” 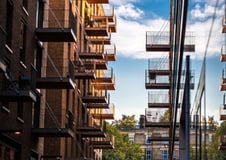