Goodlord reveals key figures for the private rented sector in July 2019 based on tenancies processed through our platform, including average rents, tenancy lengths, voidage periods and more, in the Goodlord Rental Index.

Monthly rents dropped in five of the eight regions monitored by the Goodlord Rental Index in July. The biggest drop was recorded in the West Midlands, where the average monthly rent of £711 was 1.11% less than in the previous month. 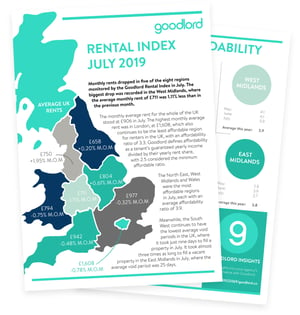 The monthly average rent for the whole of the UK stood at £906 in July. The highest monthly average rent was in London, at £1,608, which also continues to be the least affordable region for renters in the UK, with an affordability ratio of 3.3. Goodlord defines affordability as a tenant’s guaranteed yearly income divided by their yearly rent share, with 2.5 considered the minimum affordable ratio.

The North East, West Midlands and Wales were the most affordable regions in July, each with an average affordability ratio of 3.9.